When to Say When 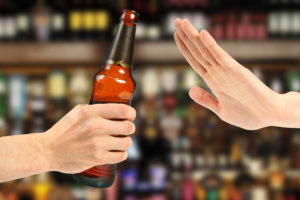 When to Say When – April is Alcohol Awareness Month

If you are like 7 in 10 adults in our country, you might enjoy a glass of wine or a cocktail to celebrate, socialize or as a way of relaxing.  It’s virtually impossible to watch a sporting event on television without viewing multiple advertisements about how much fun revolves around the consumption of a variety of different alcoholic beverages.  According to the Mayo Clinic, a moderate amount of alcohol has even been shown to have certain health benefits such as reducing the risk of heart disease or a stroke However, statistics show that approximately 3 in 10 adult’s consumption is considered “high risk” and may to alcoholism, liver disease and other problems including legal, financial and social.  Addiction has recently been in the national spotlight and is one of the leading health issues we face today.  April is Alcohol Awareness Month, established in 1987 by the National Council on Alcohol and Drug Dependence to help increase awareness and understanding about alcohol related issues and reduce the stigma associated with alcoholism.  Because alcohol is socially accepted and prevalent, the health and social problems are sometimes minimized.  What we now know is bringing addiction into the light can help those who have been struggling with the shame and stigma of the disease find recovery.

What is a moderate amount?

Medical research suggests that for most healthy adults, moderate alcohol consumption is not a problem and may even provide certain health benefits. For an adult, moderate means up to one drink a day for women and men older than age 65, and up to two drinks a day for men age 65 and younger. A drink is considered 12 ounces of regular beer, a 5-ounce glass of wine or a 1.5 shot of distilled liquor. This can be confusing because customary serving sizes can differ.  For example, many wine glasses are much larger than 5 ounces and cocktails might contain several shots of liquor.

Signs of a Problem

Some of the obvious signs that alcohol use is or is becoming high risk are DUI (Driving Under the Influence) charges, blackouts, withdrawal symptoms like trembling and even seizures or inability to go to work or school.  Other signs are subtler like unsuccessful attempts to cut back, concerns of friends and family and frequent hangovers. Binge drinking has become more prevalent among younger adults and can lead to health and legal issues. Many have difficulty accepting they might have an alcohol related problem because they see other’s drinking and rationalize and minimize the problem.

Alcoholism is a disease, not a lack of character.  It does not discriminate and affects people of all races, ethnicities, socioeconomic classes and gender.  Removing the stigma through awareness and education about the disease will help reduce the shame involved and encourage more to seek help.

For those who decide to change their behavior, there are various ways to begin.  Like other behavior changes, the first step is awareness.  Assessing how much, how often and pros and cons of alcohol use is important.  For example, a con might be your entire social life or method of reducing stress revolves around drinking. In this case finding alternatives is important to make the change.   Do you need to quit or just cut down?  If you have tried before unsuccessfully to cut down, quitting might be a better option.

Unfortunately, it is not possible to change a loved one’s behavior unless they are ready to make the changes.  While you can express your concern, and offer support, the individual needs to be willing to make a change.  Alanon is a twelve-step program which focuses on helping those who are concerned about a loved one’s or friend drinking.  Meetings are free, confidential and offered throughout the world.